Our showroom and offices will be closed Monday Dec 26th, and Monday January 2nd. Call us to schedule an appointment. Happy Holidays!

Your Source for an NYC Fireplace

Designed in Manhattan. Handcrafted in Brooklyn

Every HearthCabinet® Ventless Fireplace is handcrafted by New York craftsmen to match our customers’ expectations of refined luxury and attention to detail. Our products provide a ventless fireplace of unparalleled quality and class that will be treasured and enjoyed for years.

Using safe alcohol gel cartridges for fuel, HearthCabinet provides the only approved ventless fireplaces in NYC. We’re proud to support craftsmen and technicians located in the five boroughs of New York City and to contribute to the local economy. 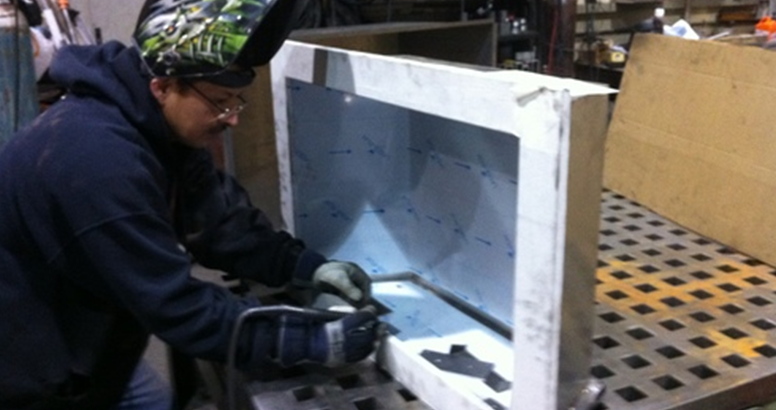 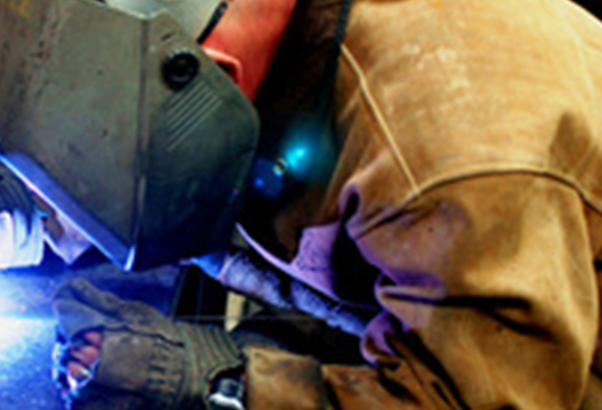 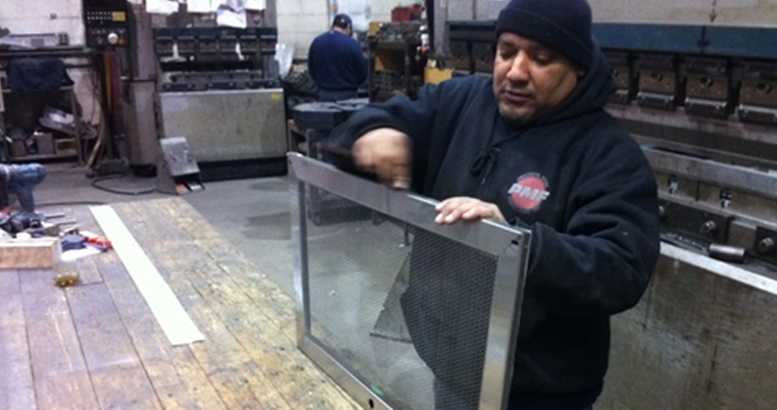 NYC has gone through many shifts in code and regulations regarding fireplaces during the past 20 years. In 2015, the city of New York put a ban on wood burning fireplaces in all new construction due to concerns about toxicity of burning wood and growing concern over climate change (3). Buildings with working wood-burning fireplaces also received an update regarding their operations: “Under the terms of the ban on new wood-burning fireplaces, which was signed into law by Mayor Bill de Blasio on May 6, 2015, wooden logs cannot have a moisture content of more than 20 percent, to insure lower emissions” (3). Many existing fireplace spaces in response to the ban, have been sealed up by building management across the city. What often remains is a beautiful mantle with painted brick or drywall covering the opening. This can be frustrating for homeowners who want to enjoy a real fire. So what are the options? 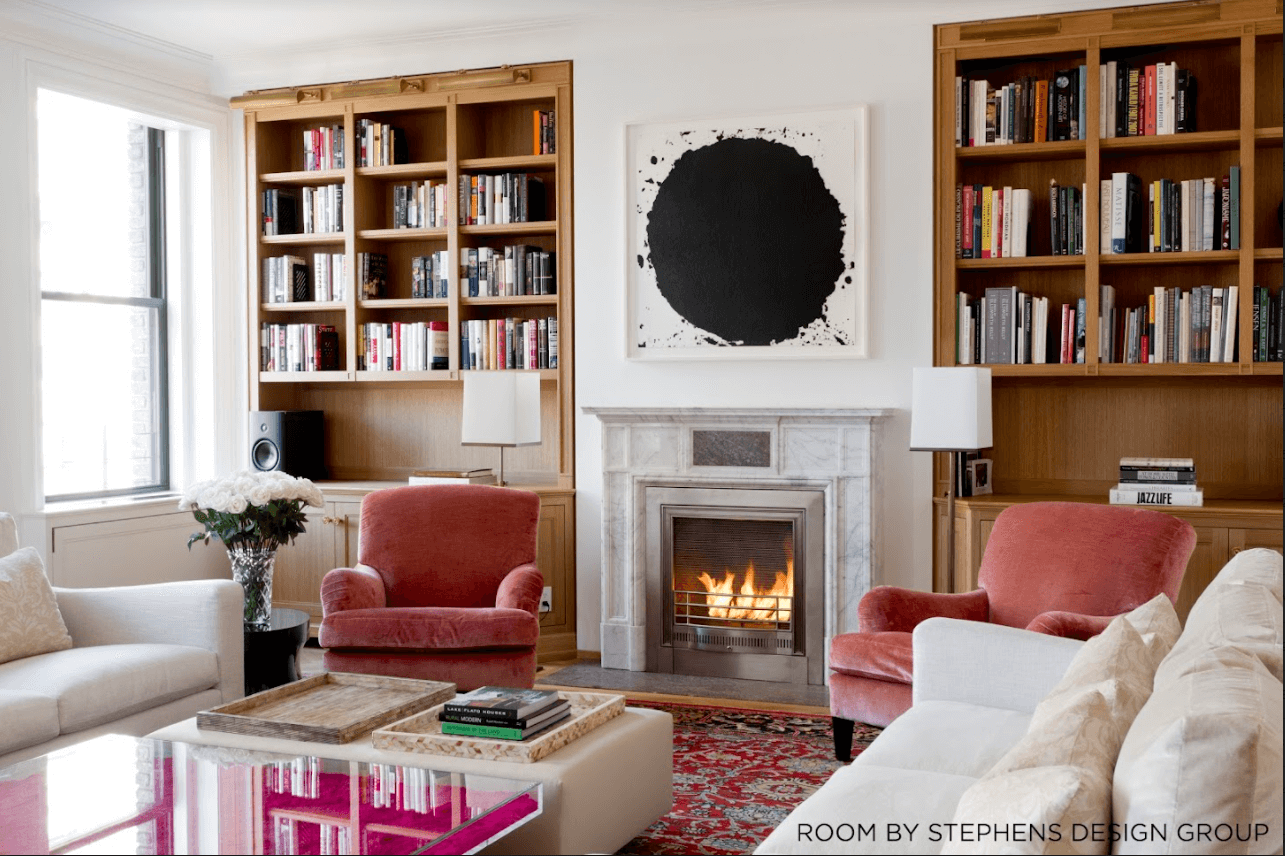 In older residences that still have the option for a fireplace, the installation and maintenance requirements for burning wood can be prohibitive. In a stretch of buildings on Cornelia Street in Greenwich Village in NYC, “All 60 of the apartments in those brick buildings, which date to the late 19th century, have fireplaces,” according to Ellen Marrone of Midboro Management, the property manager. But, for as long as any residents can remember, shareholders have been prohibited from using them. “The aged chimneys are just too leaky,” Ms. Marrone said. “A few years ago, the board looked into fortifying the chimneys with liners. But the cost worked out to about $6,000 to $8,000 per unit,” according to Mr. Ribelli, who said “it never went any further.” He added that a nonworking fireplace is “still a nice decorative piece.”(3) For those that don’t have the time or money for these renovations, but who want a fireplace in NYC, they can be frustrated.

Restrictions on Gas Fireplaces in NYC

After the ban on wood burning fireplaces in NYC, most city residents who wanted fireplaces switched to gas. “Even gas fireplaces, while still technically allowed, present their own hassles in light of Local Law 152 requiring buildings to have their gas lines inspected every five years to prevent gas-related tragedies,” writes Evelyn Battaglia of Brick Underground (2).
According to current gas codes: “All vents must be UL listed and labeled, regardless of type, unless the code makes an exception explicitly. Gas vents must meet a series of spacing requirements with respect to the roof and heating equipment, as well as a minimum clearance with respect to forced air inlets… Gas vents can be shared by multiple pieces of equipment if they are in the same building level; sharing vents across different floors is not allowed.” (5) This then created a problem for Manhattan townhouses whose square footage is very narrow and where the houses are so crowded together that there is not enough space for individual venting.

Many building management teams have now put a stop to gas fireplaces to decrease the headache and maintenance costs of having them. While causing less hassle for them, this creates more inconvenience for New York City homeowners who want a fireplace.With the rising cost of gas lines in the city, most building managers are saying “no” to gas altogether. We see this in many newly constructed buildings that make the switch from gas stoves to electric or induction cooking appliances and from gas radiators to central heating.

An additional consideration related to New York City fireplaces is climate change. In an effort to begin to combat climate change, New York City recently announced that they’re banning gas hookups in all new construction. (7). With a recent shift toward environmental protection, installing a fireplace in New York City is even more challenging. Many architects and designers started to see the effect of these bans when their clients wanted a fireplace in their renovations.

For those that do still have an option of having a vented wood-burning or gas fireplace, some are making the switch to ventless fireplaces as well. Ventless gas fireplaces are illegal in NYC. Other than climate benefits, choosing a ventless fireplace can save a customer as much as $20,000-$30,000 between construction, permits, decor, and maintenance. After the initial installation of a vent, there are maintenance and repair costs associated with the fireplace flue. For those who are on a budget, or are not keen to handle an intense maintenance schedule, ventless options have been an increasingly viable conversion option for them. For families who predict they’ll move in the near future, this allows them to have a fireplace in their home without the commitment of permanently installing it to that specific location. If they move, options like HearthCabinet allow families to take their fireplace with them. Having a functional fireplace also increases the property value of a home if the owners wish to leave it behind.

Naturally, following the multiple fireplace restrictions that the city of New York has imposed, many alternative fireplace options started gaining popularity. Electric fireplaces are a popular option, but homeowners compromise on having a real flame in their home. Although most of these fireplaces still require a board permit, the process of installing one is significantly easier and there’s no venting or chimney installation needed.
The move to ventless fireplaces brought about a rethinking of what a fireplace can be but drawbacks remained. For example, electric fireplaces produce water vapor and offer a faux flame. Fireplaces started to take on a linear shape rather than a square one. Although these solutions seemed like the most viable, electric fireplaces satisfied the need of a fireplace concept while compromising on the beauty of the real flame. And warmth from the fireplace was no longer present, that is, until HearthCabinet came along.

HearthCabinet Ventless Fireplaces was started in 2004 by Arthur Lasky, an architect, and Michael Weinberger, an inventor and product liability attorney. Safety is a leading goal for fireplace customers and it’s one of the principles that HearthCabinet was founded on. Arthur and Michael wanted people to be able to enjoy having a fireplace anywhere, even in homes and buildings that can’t accommodate wood or gas fireplace installations, such as most NYC residences. So they invented a product that could be installed virtually anywhere without major renovations needing to occur. (1) A HearthCabinet® Ventless Fireplace is a particular type of ventless fireplace that uses cartridges containing a clean-burning mixture of isopropyl alcohol and water. Installation is easy and safety is built in. 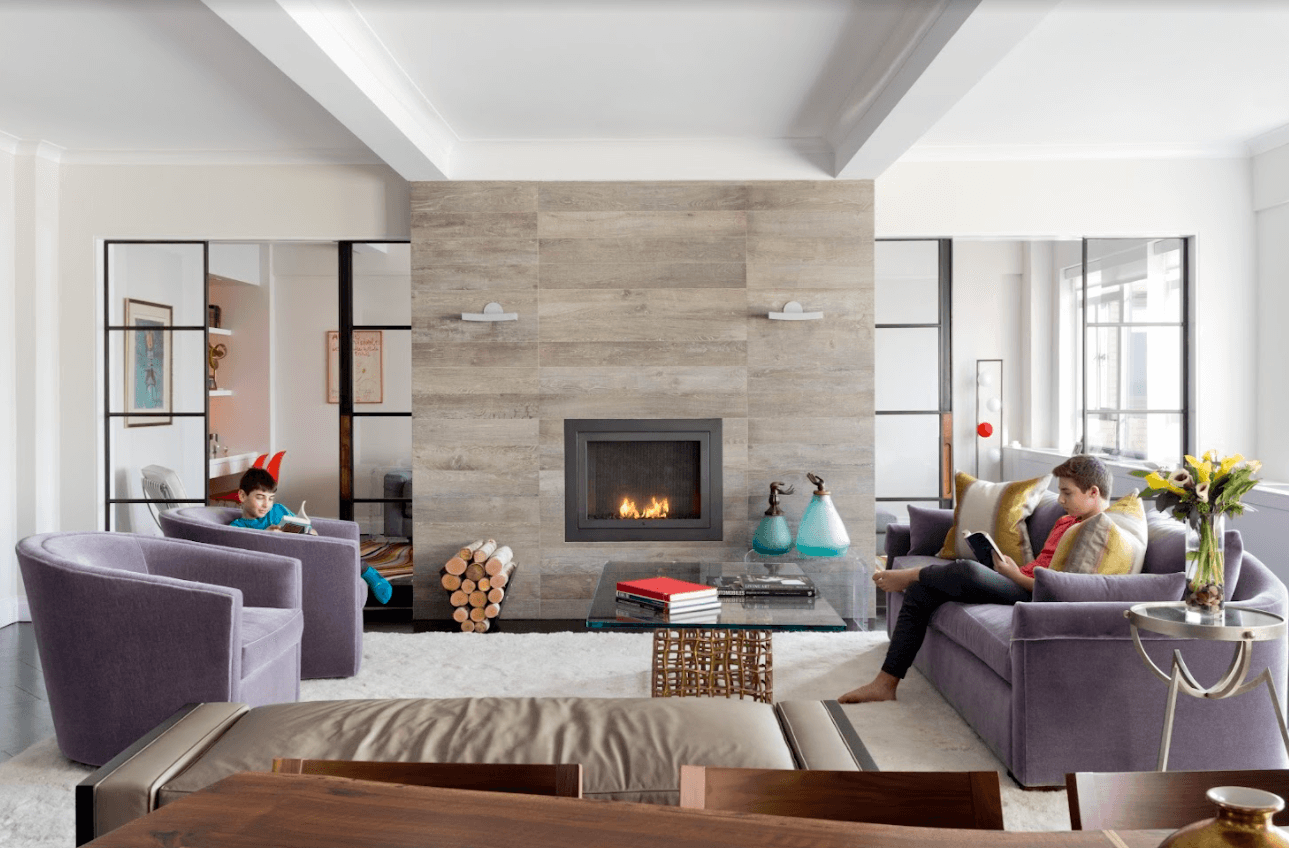 “Our standard ventless fireplace models are ETL listed to UL standard 1370 (STANDARD FOR SAFETY – Unvented Alcohol Fuel Burning Decorative Appliances) which is a National Safety Certification.
Additionally, in New York City, the Building Department and Fire Department have reviewed and accepted the HearthCabinet Ventless fireplaces for installation in NewYork City.
In a letter dated March 29, 2007, Engineer Donald Gottfried, the Director of the Materials Equipment Acceptant Division of the NYC Building Department, concurred with the Fire Department’s finding and also had no objection to the HearthCabinet’s use in NYC.

One of the many benefits of HearthCabinet Ventless Fireplaces is that homeowners and designers now have the option of customizing their fireplace like never before. One of HearthCabinet’s very early sales was a bright red fireplace that was installed in a gray tiled surround. Fireplaces can now carry a clean look, all while providing the feel and look of a fireplace, complete with a REAL flame. Free from ashes and debris, clients in New York City are now able to have a fireplace in their home without compromising on aesthetics or environmental concerns. 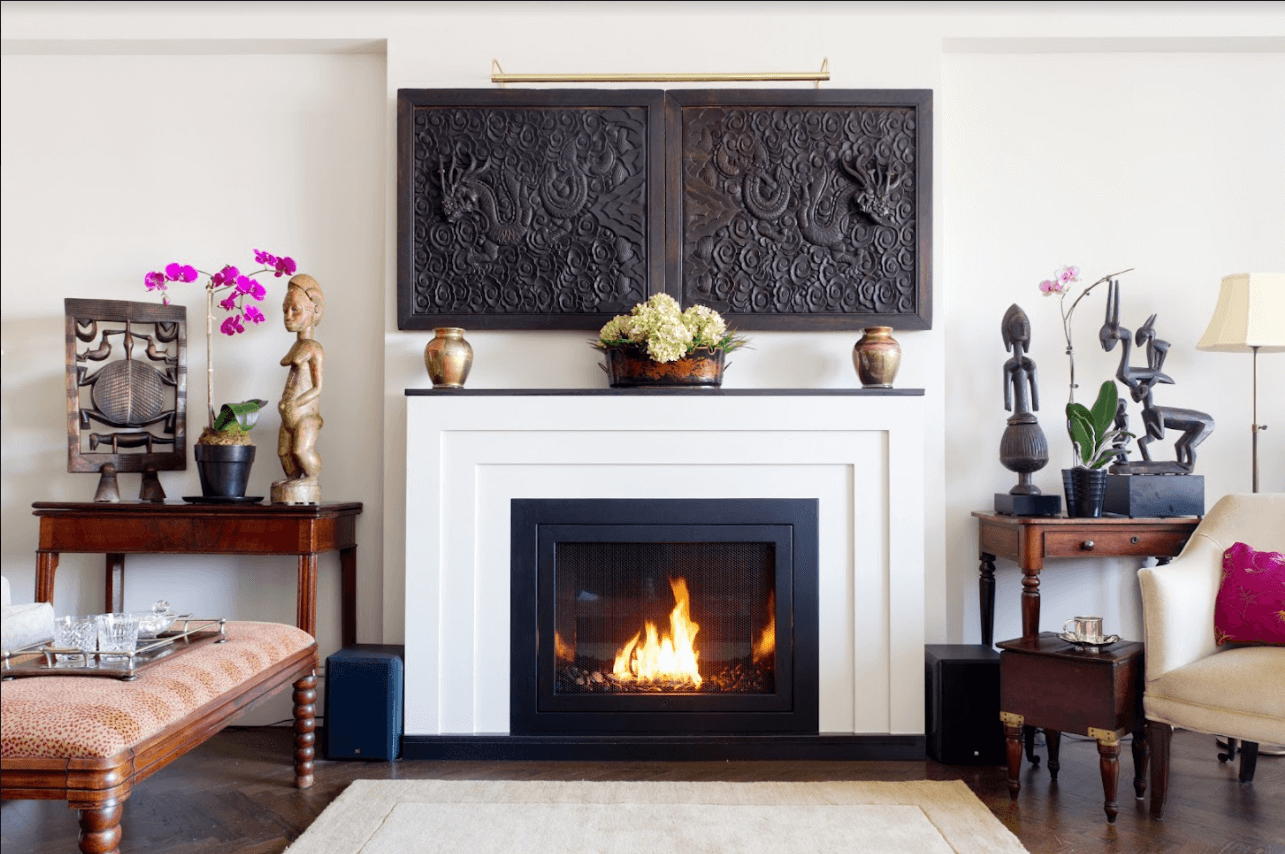 Now with over 2,000 installations in New York City alone, clients are referring to HearthCabinet as the “best kept NYC secret.” A real flame fireplace evokes powerful nostalgia in those many that had the privilege of growing up with one. There are many things that can make someone’s home feel homey and HearthCabinet takes pride in knowing that their fireplaces can deliver that wonderful feeling.

If you would like to learn more about HearthCabinet and schedule a showroom visit either in-person or online, please contact us
by phone (212-242-1485) or email contact@hearthcabinet.com.

Thank you for subscribing. You've been added to our list and will hear from us soon.

If you haven't done so, check out our gallery or product pages for inspiration